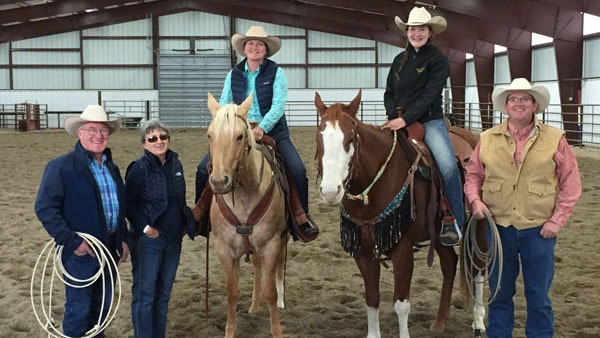 Tucked between the Owl Creek Mountains and the Absaroka Range, Wyoming’s Hot Springs County is no ordinary place. Large steaming hot springs rise near the mouth of the Wind River Canyon, rock outcrops from the Jurassic age offer up scatterings of dinosaur fossils, and a “wedding of the waters” changes the Wind River to the Bighorn River before it flows on to the Bighorn Basin.

This colorful, historic landscape is home to the V Ranch; a multigenerational family operation owned by the Wilson family- Jim and Terry Wilson and their daughter Billie Jo Norsworthy, along with her husband Jason and daughter Emme.

The Wilson family moved to Hot Springs County in the late 1930s when Jim’s father, Willard, was in the fifth grade.  Willard and his high school sweetheart, Maycle Boyd, wed in 1947 and begin farming, raising sugar beets and grains. They would eventually enter the world of cattle ranching, creating an international livestock business.  Willard’s family remembers he would, “talk cattle all day, every day!”  Willard also spent a few years representing Hot Springs County in the Wyoming State Legislature.

Jim and Terry raised one child on the ranch, their daughter, Billie Jo.  After college, Billie Jo and her husband Jason asked if there might be a place for another generation on the ranch.  “We were thrilled that Billie Jo wanted to come home to ranch,” says Jim. “Living and working with family, I’m living the dream!”

It was an adjustment for Billie Jo, who has a master’s degree in flute performance and had a different career before returning to ranch.  However, she and Jason were committed to the ranching way of life.  “When my husband and I graduated from college and discussed starting a family, we made the joint decision to come back to the family ranch. We wanted to be surrounded by the values and work ethic that often go along with agriculture,” says Billie Jo.  When their daughter, Emme, was born, Billie Jo struggled with the same things other new moms face, time management and how to get everything done!  Emme is now thirteen and spends many hours in the saddle roping and riding alongside her parents and grandparents.  “We hope she loves ranching and wants to make her home here, but we will support her if she chooses another path,” says Billie Jo.  “We just want to do our part in making sure the ranch is here, in some form or another, for future generations.”

Even as a busy ranching family, the Wilsons take time to be involved in their local and agricultural communities.  From volunteering as a livestock judge to holding office in ag associations, they are generous with their time and efforts. Jim has served as a past president of the Wyoming Livestock Board, President of the American Salers’ Association, and President of the Wyoming Stock Growers Association. Terry has served as a supervisor for the Hot Springs County Conservation District, and both Jim and Terry have served on the Hot Springs County School Board.

The Wilson’s are also very active in stewardship-focused projects in their area, including the Kirby Creek Coordinated Resource Management and associated habitat improvement projects such as stream restoration, beaver reintroduction, reservoir construction, water pipelines, prescribed burning, sagebrush management, and grazing improvements.  In addition, they have actively fought against bank erosion and silt run-off in their riparian areas, and have worked closely with Hot Springs County Weed and Pest to protect Kirby Creek and its side drainages.  They were the recipients of a Wyoming Game and Fish Landowner of the Year award, and were quoted as having a ranching philosophy that “manages for sustainability, not just for cattle, but for the resource as a whole.”

In spite of exceptional management, thoughtful stewardship, and an enduring love for the land, livestock, and way of life, Billie Jo sometimes fears for the future of agriculture. “I wonder if the people of our country don’t value what agriculturalists, and other multigenerational businesses, are striving to do to meet the needs of a growing population?”  When asks what she hopes Emme will learn from the agriculture way of life, she talks about the work ethic of ranchers and the willingness to work hard for a job well done.  She talks about their ranching way of life as a “calling,” something to be valued.

The interview is cut short as Jim spots the school bus pulling up and Emme gets out.  She and her grandfather plan to spend the afternoon roping and they’re both raring to go.  “It’s a good day,” says Jim, “a very good day.”

Tucked among such wonders as the Washakie Needles perched high in the Absarokas, and the prehistoric petroglyphs of Legend Rock, the Wilson family is one more treasure in Hot Springs County’s box of truly unique gems.