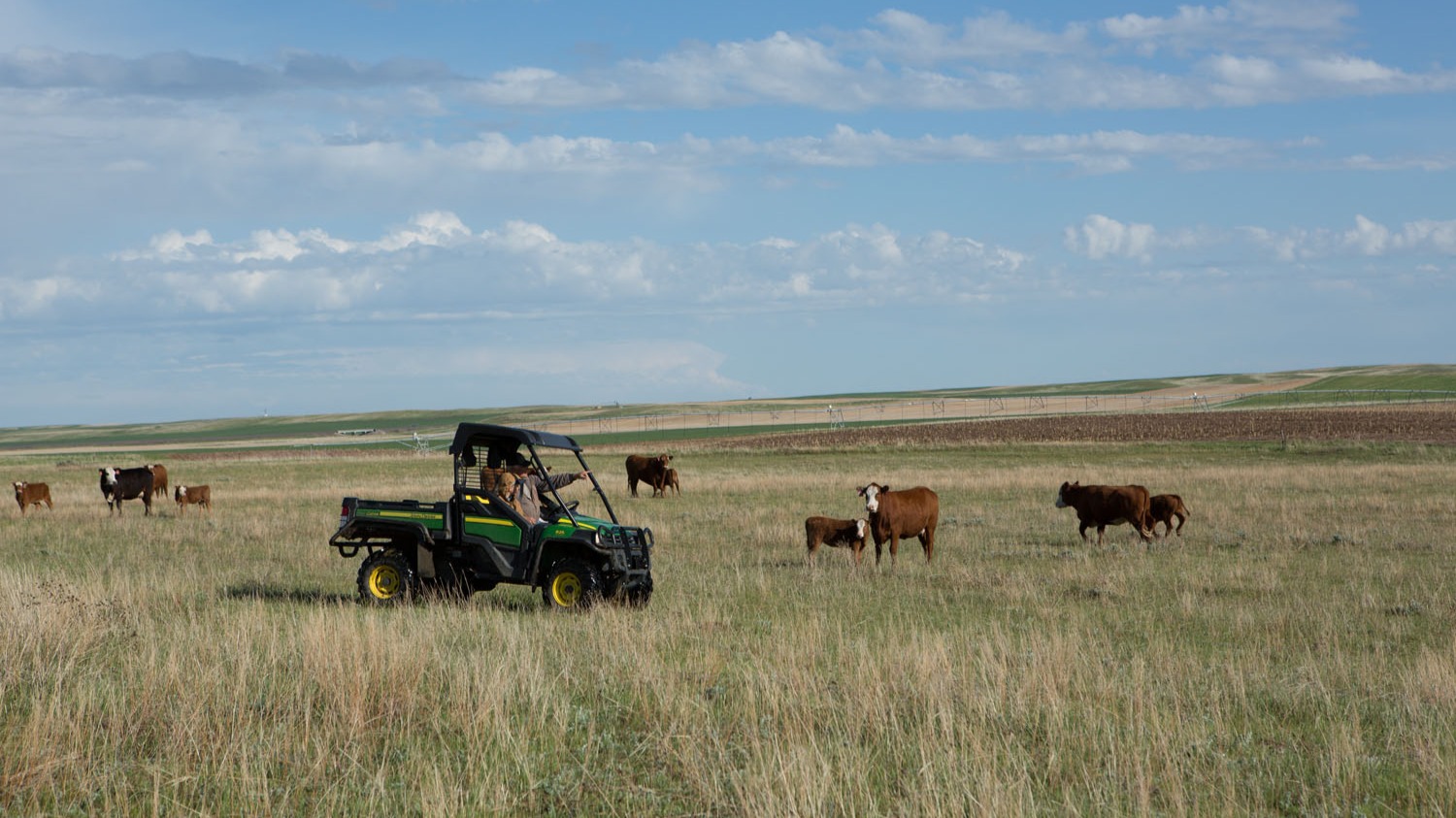 There’s snow on the ground, the temperature hasn’t risen much above zero, and a biting wind makes it feel colder yet.  However, it’s calving time, and that means every few hours, day or night, someone on the Lerwick Brothers family farm/ranch bundles up in cold weather gear, grabs a flashlight, and heads out to monitor the farmyard maternity ward.  Michael and Diane Lerwick’s five children, ages 6-12, are the fifth generation to call their corner of Wyoming agriculture “home.”  Their young family, along with Michael’s parents, Jim and Linda Lerwick, work hard raising cows, crops, and kids, near the small town of Albin, Wyoming.

The history of the Lerwick farming families began with two Norwegian immigrants, August (Gus) Lerwick and Hattie Olsen.  August Lerwick took advantage of the Homestead Act and homesteaded three miles west of Albin in 1908, and Hattie Olsen only a mile east of Gus in 1911.  Signed into law by President Abraham Lincoln on May 20, 1862, the Homestead Act encouraged Western migration in the United States by providing settlers 160 acres of public land. In exchange, homesteaders paid a small filing fee and were required to complete five years of continuous residence before receiving ownership of the land.

When Hattie homesteaded, she borrowed $300 from the bank to build a small square wood-framed house with a stove in the middle. This house, though now with many improvements and additions, is still home to some of the Lerwick family. After Gus and Hattie were married, Gus sold his quarter section of land and bought another quarter adjacent to Hattie’s. To this union were born four boys and four girls.  Their operation included wheat, cattle for beef and milk, chickens, and forage crops for winter-feed.

As the family grew, so did the operation. During the years of the Great Depression, Gus died from Parkinson’s, but the family worked hard and never suffered for lack of the basic necessities. Over time, the operation was split twice as more descendants were added and continued in the agriculture profession.  Incorporating both cattle and crops has allowed individual families to further build their own operations as they see fit.

Michael and Diane Lerwick were married in 2003.  Even as a young boy Michael loved the farming lifestyle, and Diane grew up very involved in her family’s Montana cattle ranch. Today, Michael manages the farming end of things and Diane oversees their cattle program.  Michael’s dad, Jim, is always available for advice and consultations.

The family raises wheat, corn, pinto beans, grazing cover crops, and gets three cuttings of premium hay each year.  Their cattle program combines premium genetics from select herds across Montana, the Dakotas, Nebraska, and Wyoming.  They market replacement heifers through Maternal Replacement Solutions, a partnership they spearheaded to fulfill a demand for consistent quality cowherds.  With land they own, rent, and lease for grazing, Lerwick Farms manages approximately 14,000 acres.

While juggling the many daily demands of farming and ranching, keeping up with their active children- Stuart (12), Justin (10), Hattie (8), and twins Kenneth and Anna (6), Michael and Diane still try to find time for their community.  Diane often volunteers at their local school and Michael sits on the board of their local energy coop, High West Energy.

“As agriculturalists, we need to tell our story,” says Michael.  “With today’s modern agriculture, one United States farmer or rancher produces enough food to feed 155 people.  We need to make sure our consumers know we produce a safe, healthy product; one we are feeding to our own families. That should tell you how confident we are in the quality and safety of our product.”

Many researchers list the average lifespan of a small business in America today to be 10 years or less.  Next year, the Lerwick family will celebrate 110 years of farming and ranching in the high plains of southeast Wyoming.  As for the next generation, they’re too busy donning their cowboy hats, boots, and other calving gear to comment.