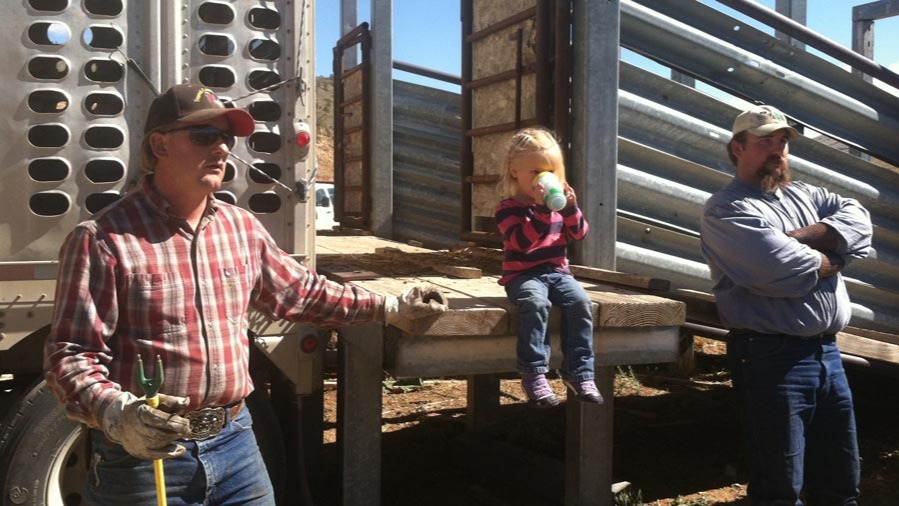 They may live near Lost Cabin on Bad Water Road, but the Hendry family feels very much at home sweet home.  William “Scotty” Hendry founded their home on the range, Clear Creek Cattle Company, in the early 1900s and the family’s fifth generation is now calling the ranch ‘home.’

William “Scotty” Hendry grew up in Scotland reading stories about cowboys and dreaming of becoming one.  So, in 1906 he boarded a ship bound for American and eventually found his way by train, then stagecoach to Lander, Wyo. where he spent his last fifty cents on a haircut and shave.  Leaving the barbershop, he offered a hand to a man loading his wagon, who in turn offered him a job herding sheep.  Eventually Scotty had a sheep herd of his own and some land to go with it.  He married Anna Dana from Pennsylvania who came west to teach school.  Their fourth child, James, was their only child interested in ranching.  After serving in the Army Air Corp during World War II he returned to ranching, married Mary Helen Cheatham of Casper, and had one son, Rob.

Rob and Leslie met in Casper, Wyo.  Leslie was from a neighboring sheep ranch so didn’t have to move far when the couple married in 1981 and settled onto the Clear Creek Cattle Company headquarters.  The couple has two sons, J.W. and Jarrod, who are the fourth generation on the ranch.  The young men are interested in different areas of ranching, making them an efficient team.  Jarrod’s primary interests are horses and cattle, so he and his cow dog, Bubba, oversee the “cowboy” duties.  J.W.’s interests lean more towards the farming and equipment.

J.W. met his wife Hannah at Central Wyoming College in Riverton.  Hannah quickly found her footing as a rancher and has worked side by side with J.W. since their marriage in 2006.  In 2011 they welcomed a little girl, Avery Ellon who spends her days on the tractor with her dad or helping her mom drive her beloved team of black Percheron work horses.

Clear Creek Cattle Company is a cow-calf operation with Black Angus cows bred to Charolais bulls.  The ranch enrolls in a program through Samson, which certifies their cattle are age and source-identified and Non-Hormone Treated Cattle (NHTC).“Our family freely shares our story of animal husbandry.  We raise beef we are proud of and enjoy feeding our families.”  The ranch participates in the national Beef Quality Assurance (BQA) program that provides guidelines for beef cattle production and focuses on raising consumer confidence.

Clear Creek Cattle Company runs cattle on private, state, Bureau of Land Management land, and private leases.  To become proactive in the quest to maintain and monitor the range and watersheds, the ranch has entered into a pilot program with the Wyoming Stock Growers Association, the Wyoming Department of Agriculture, the University of Wyoming and the Bureau of Land Management. Monitoring data is gathered once a year and analyzed to make important decisions pertaining to the land and ranch herd management.

Rob and Leslie have been very involved in the agriculture community, tirelessly believing in the importance of supporting and representing the industry.  Rob has served in many offices, including the presidency, of the 140-year-old Wyoming Stock Growers Association.  He also served on the Wyoming Beef Council Board, National Cattlemen’s Beef Association committees, and is a Natrona County Commissioner.  Leslie is very active in CattleWomen groups at the county, state and national levels.  She serves on the local FSA Board and as Secretary on the Natrona County Republican Executive Committee.  These are just a few of the groups and agencies the couple supports with their time and efforts.

“We support the Beef Checkoff,” says Rob. “It’s a program funded by the beef industry to support research, education, and promotion of beef, and Clear Creek Cattle Company is a proud supporter.”

Ranchers like the Hendry family ensure the agriculture industry stays in tune with a changing consumer marketplace.  They work hard as stewards of the land and are more than willing to share their story of four generations producing safe, healthy, Wyoming-raised beef! Featured 2014.