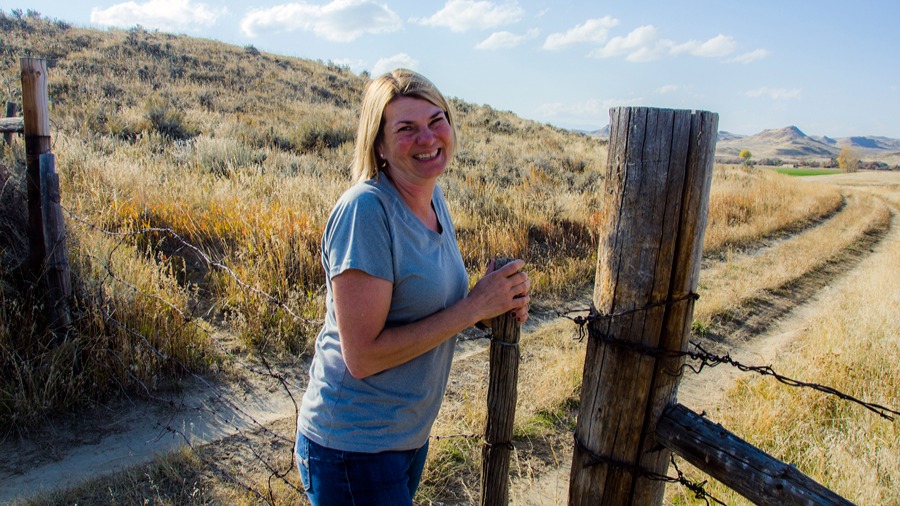 (Since this article was written, Mark and Jennie have been elected Governor and First Lady of the great State of Wyoming.)

Jennie Gordon navigates the dirt track in a well-traveled truck, keeping an eye on the calves mingling in pastures on Merlin Ranch, located in the red scoria hills just outside of Buffalo in northeastern Wyoming.   She, like the majority of women in ranching, wears many hats. While technically she is the owner-manager, she heads up marketing, record keeping, and the vaccination program on the ranch. Jennie also cooks for everyone working, helps care for the animals and the land, and has been known to mend a fence or two.

"It's really all hands on deck on the ranch, especially during calving season, so basically whatever it takes to get the work done." -Jennie Gordon

The Merlin Ranch is a cow-calf and heifer development operation and runs a predominately Black Angus herd crossbreed to Herefords to ensure hybrid vigor. The cattle, typically about 500 head, are raised on 12,000 acres of leased and owned native range and hay grown on the ranch.

Gordon thinks that working on the ranch is the best job. “I’m outdoors, and this is my office,” she says waving to the sagebrush-covered hills and the green pastures.

“I love working with the animals and ensuring their health. There’s so much science and, even, art to this work. You watch the animals closely, knowing from how they move when they are sick and then how to take care of them.”   “It makes me feel empowered but not in a harsh way.”

Her husband Mark grew up on the Gordon Ranch outside of Kaycee, but Jennie isn't from a ranching background.  She grew up in Omaha, attended the University of Wyoming, fell in love with the state and stayed. Before meeting her husband, she worked in the medical industry for 15 years as a medical technician and then sold lab equipment.

After marrying Mark, she decided to learn everything about the cattle business, reading books, meeting industry experts and attending classes. “I've signed up for everything; I thought, ‘if I'm going to do this, I have to know at least as much as the people who work for me so that I don't hinder them.’”

Today Mark and Jennie own and operate the Merlin Ranch, as well as the Gordon Ranch with Jennie’s sister-in-law. Jennie and Mark have four adult children.

With her husband’s job as Treasurer for the state of Wyoming taking him down to Cheyenne Jennie has taken on a large role at the ranch. Her medical background has been an asset particularly with record keeping and the health and daily science side of the industry.

“Record keeping is my jam,” she laughs. Through their database, she can tell details about every cow and calf on the ranch, every shot they ever had, their weaning weights, and vaccination numbers. “You just challenge me to find anything, and I will have the answer for you on my database. Record keeping is important because people want to know where their food comes from.”

The ranch also keeps extensive records on the land to track their carefully planned grazing rotations. Their land stewardship efforts include having a third party monitor the range for changes in vegetation levels and bare ground, as well as working with hydrologists ensure wise water use. In 2009, the Society for Range Management selected the Merlin Ranch as the winner of the Excellence in Range Stewardship Award.

“We want the healthiest range we can, so our cows don't stay in one pasture for a long time,” Gordon explained, noting that they move cattle between an estimated 65 pastures in a year which helps to train the cows to move with less stress.

“Cattle are very intuitive, and they'll pretty much go where you want them to go if you give them the right cues,” she said.  “We blow a whistle and open the gate, and they know that they're going on to fresh feed; they just grab their calves and go.”

Gordon is passionate about integrating low-stress cattle handling techniques which results in calmer animals that are easier to manage. “Whenever we work our livestock, we do it gently.  We try to make sure that if they're in pairs, the moms have their babies with them. This reduces their stress levels.”

“We care about our livestock, and not just because it’s our livelihood,” Gordon stressed.

Last year a massive blizzard coincided with calving season in April. “We had to cut fences to get cows and calves to shelter because they didn't know where to go; they could barely see. We could barely see. The guys went out to the pastures every hour, and then I would go out in between to check.”

Most of the mothers and newborns were okay, but some had to be brought into the ranch’s warming shed equipped with heating lamps and a blow dryer. Each time, Jennie was waiting to give the calves natural colostrum which they need within the first two hours of life.

“We blew the babies dry, got colostrum in them as soon as possible, and got them warmed up. But if I need to bring calves into our house, I do it. We will do whatever it takes to care for our animals."