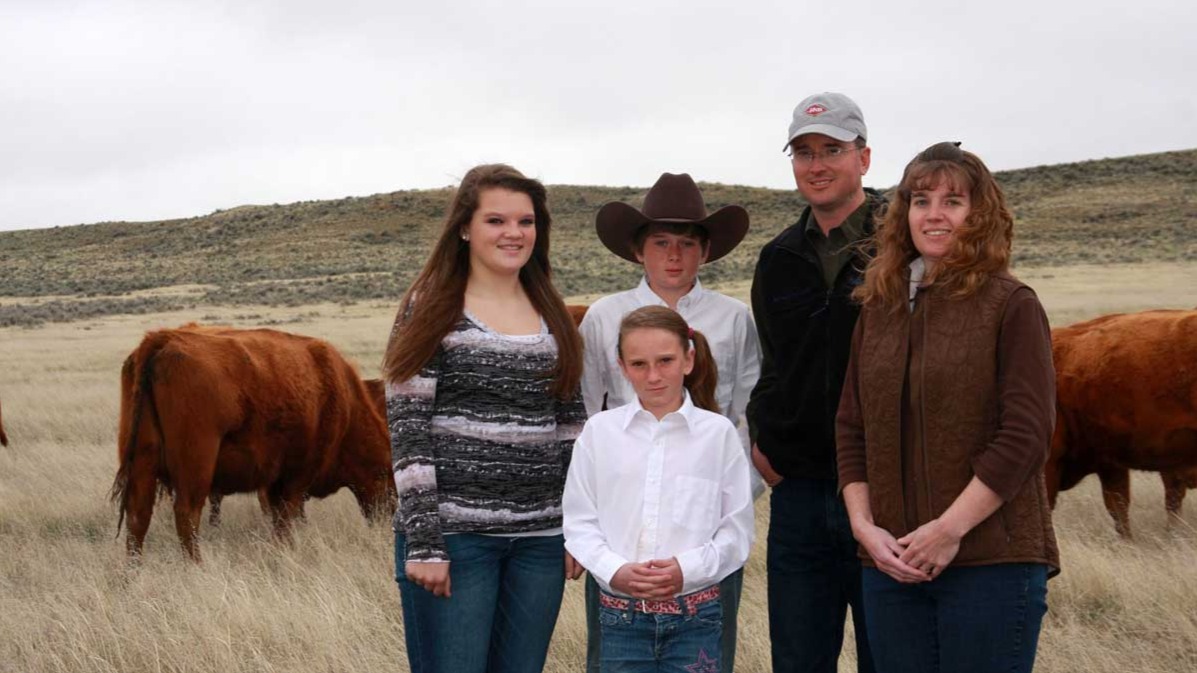 "I believe that any conservation practice should be sustainable. Since most of us hope to be profitable on an ongoing basis, we must take care of our grass and water." - Ryan Fieldgrove

Like many of Wyoming’s agricultural families, Ryan Fieldgrove’s has been putting down ranching roots for generations.  His great-grandfather Herman Luddeck left his home in Germany in the late 1800s and eventually settled near Crazy Woman Creek.  Now, over 130 years later, Ryan and his wife Teresa continue the family tradition of ranching near Buffalo, Wyo.

Teresa also has agricultural roots.  Her father emigrated from the Basque Country in ValCarlos, Spain to work as a sheepherder and married American-born Basque, Alberta Curutchet.  Teresa grew up on her family’s sheep operation south of Buffalo.

When Ryan’s parents retired from ranching in 1999 they turned their operation over to Ryan and his brother Rusty.  The brothers opted to split the ranch in two and operate independently, which created the challenge of making a smaller ranch viable.  Their ranch consisted of three pastures, a stock watering pipeline, a slew of needed improvements, and an incredibly invasive leafy spurge problem.

They went to work to create a strong conservation plan that would improve their land for wildlife and livestock alike.  With the help of the National Resource Conservation Service, Conservation Districts, Farm Services of American, Wyoming Weed and Pest and others, they implemented programs to improve fencing, weed control, wildlife and livestock habitat, and water access.  Ryan discovered that his ranch boasted three main soil types, three types of topography, and two microclimates, all factors to consider when establishing stocking rates and a grazing plan for his cattle.

“I believe that any conservation practice should be sustainable,” says Ryan. “Since most of us hope to be profitable on an ongoing basis, we must take care of our grass and water.”

It was all a learning process.  One lesson was learned during drought years when Ryan sold the majority of his cows in order to not overgraze, but then discovered the cattle overgrazed the draw bottoms and didn’t touch the ridges or flats.  “This caused heavy use of the productive parts of the ranch and didn’t stimulate the other range,” says Ryan.  He then implemented a grazing rotation system to give all the range a chance for stimulation, rest and regrowth.

To say leafy spurge (an invasive weed not native to Wyoming) was a problem on the ranch would be a gross understatement.  In fact, Ryan’s father estimates he spent over one million dollars in his lifetime in an attempt to control the weed.  Ryan had heard about the use of goats for brush and weed control and began to research breed, marketing, and general goat management.

“We chose a ranch near the Mexico border that raised a crossbred South African Boar with a fourth wild Spanish goat,” remembers Ryan.  “The South African Boar is known for droughty tolerance and meat production and the Spanish goat is known for endurance and resilience.  We bought ten goats and a guard dog and came home.  We put the goats in a pasture and figured they would be there for about a month.  They had completely eliminated the entire weed in ten days!”

Along with their Weed and Pest District they decided to try this form of weed management on a larger scale and the following year herded 500 goats.  Though the goat project has had many hurdles, in just ten years they went from approximately 20% leafy spurge infestation to less than 1%.

As the Fieldgroves continue to graze their cattle, sheep, and goats at the foot of the beautiful Big Horn Mountains, they keep a balanced eye on conservation and profitability.  “I’m thankful for agencies like the Wyoming Beef Council,” says Ryan. “We depend on reliable partners to work alongside us and share the story of beef production and history of America’s farming and ranching families.”