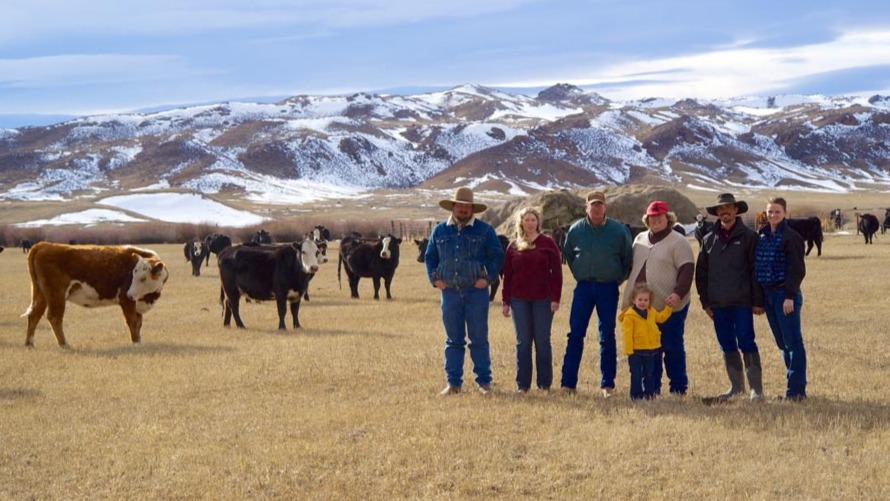 What do a ship captain, Shetland ponies and crowbars have in common?  They have all played a role in a colorful western saga- the Farthing family history.  Played out against the vast, windy backdrop of southeastern Wyoming, the Farthing’s ranching legacy began in 1883.  That was the year New Yorkers Thomas Farthing and his son Harry ventured west to purchase horses and fell in love with the Cheyenne area.  Before heading back east, Thomas purchased the Pole Creek Ranch near Cheyenne for Harry, who found himself a rancher at the tender age of 19.

Harry’s mark on the Farthing ranching history was his innovation in crossbreeding cattle.  At the time ranchers in Wyoming were primarily raising purebred Herefords, and he was looked down on for this practice.  However, as Harry’s cattle began breaking Omaha market records, the neighbors had a change of heart!  With no children to pass his ranch to, Harry’s brother Charlie purchased it from his widow Ida in 1945.

Charlie Farthing had heeded his big brother Harry’s prompting and made his way to Wyoming in 1902.  He purchased a ranch near Iron Mountain from a former ship captain for three dollars an acre.  This is the ranch the Farthing family lives and works on today.

Pictures from that time period depict the Iron Mountain ranch as a desolate scene with no meadows, trees, or ditches.  The Farthing family went to work and Charles surveyed and built a water reservoir with horses and a slip.  His planning and design was carefully carried out and the reservoir is used to this day to irrigate the ranch hay meadows.

Charlie’s wife Maude also proved up to the task of carving a life out of dusty days and hard work.  She once took a particular dislike of a dilapidated building that marred the view from her kitchen window.  After asking the men repeatedly to tear it down with no results, she took the situation and a crow bar into her own hands.  After a year of prying a piece or two off the building every day, it eventually fell down.  Maude’s take on the situation was this, “The Farthing men are great husbands, fathers and cattlemen.  However, if you want anything done, you’ll have to do it yourself.”

Charles and Maude had two sons, Tom and Merrill.  Tom and his wife Irene inherited the Pole Creek Ranch, which they passed down to their daughter Sherry and her husband Gene, who eventually sold it in the mid 1970s.  Charles and Maude’s second son, Merrill, lived on and operated the Iron Mountain ranch until he passed it to the generation of Farthings ranching today.

Merrill and his wife Grayce were stewards of the ranch during tough financial times.  They too met their challenges head on, however, and Merrill worked a variety of jobs on the side to make ends meet.  He was a brand inspector, graded county roads, sold milk, and hired out to neighboring ranches.  Grayce trapped furs and sold them to National Furs and Fashions in Cheyenne.  When Merrill was 85 years old he admitted he needed to slow down and was quoted as saying, “…Seems once a person gets past 80, the new starts to wear off.”  Another of his sayings was, “I never had to straighten my hand out until I was 50.  It was always wrapped around a handle or a crank or a pitchfork.”  Merrill lived to be 98, dying in 2002.

Merrill and Grayce’s son Charlie and his wife Carol currently operate the ranch with two of their three sons and their wives, Tom and Sara and Ryan and Rita.  When their sons got engaged, Charlie and Carol wanted to make sure their fiancés understood what it would mean to live and work on the Farthing Ranch.  Carol says, “We insisted that the girls spend time at the ranch before getting married so there would be no surprises.  Both boys did well in choosing wives who support them and love this life.”  Carol was a self described “city girl” when she met Charlie and says, “One of the hardest things for me to learn and understand was that the ranch came first.  It came before me, it came before everything.  It has to.  Livestock depends on you.  But, I learned when you take care of the livestock and the land, it takes care of you.”

Ryan and Rita met on their first day of college at the University of Wyoming. Rita has been a welcome hardworking addition to the family and says in reference to her work with their cattle herd, “I’ve been able to merge my vacation and vocation. I’m playing momma to 800 babies every day;  I’m doing what I love to do!”  Ryan echoes her sentiments, “This is the best lifestyle I could ever want.  I love what I do everyday and I’m fortunate enough to work with family.”

Tom and Sara have two children, a daughter Brinley and son Carson.  The kids are already involved in the ranching lifestyle.  “Every day is ‘take your kids to work’ day,” says Tom.  The kids learn to work at an early age and Brinley at 3 is already learning to ride on her Shetland pony named Rocky.  Like Carol, Sara grew up in town but has learned to appreciate the ranching lifestyle.  “Ranchers have to have a variety of skills. In one day, Tom may need to be a mechanic, carpenter, veterinarian and crop farmer.  The women have to be just as flexible.”

Each member of the family is passionate about working on the ranch, though all agree their favorite time of year is calving.  Calving starts March 20th and during that month no one will make the 36-mile journey into town.  They coordinate tasks to ensure the cattle are looked after around the clock.  There is no cell phone service on the ranch so they keep an eye out for each other.  A horse that has been out or vehicle gone for too long can be a sign of trouble.

Of course, no story about the Farthing Ranch and its people would be complete without the history of its livestock.  The ranch has had both sheep and cattle through the years, though now is strictly a cow-calf-yearling operation.  They have an 800 head cow herd and raise calves, which they sell after a year as yearlings.  They started with Hereford cattle but have adjusted genetics to meet consumer demands.  Now their herd is primarily Black Angus and Hereford.

Perhaps the most interesting herd to roam their range is made up of Shetland ponies.  To understand the “why” of this seemingly out of place pony, a little history is required.  The Farthing family pony business started in the early 1900s when the first Charles you read about here received a purebred stallion and 2 mares imported from the Shetland Islands as a childhood gift.  They came west with him and began one of the largest heads of Shetland ponies in the United States, at one time numbering around one thousand head.  Ponies were in high demand and in tough times the ponies saved the ranch several times over.  For example, when a man’s wages were one dollar a day and calves brought thirty dollars a head, ponies would bring two hundred and fifty dollars each!  To honor this history, the Farthings continue to maintain a small herd of Shetland ponies.

The Farthings also raise their own horses on the ranch, predominately quarter horse and thoroughbred crosses, “With a little paint thrown in for fun,” says Carol.  Merrill was once quoted as saying, “The horse built this country.  The first railroads, canals and many of our present roads and highways we owe to the muscle of the horse-he carried the rancher, the soldier and the businessman.”

As the Farthings look to the future of ranching and their family’s place in it, they point out a few challenges.  “We feel the main challenges facing ranchers today are governmental interference and the weather, neither of which we can control,” says Charlie.  However, they know the Farthing Ranch will continue in good hands.  “We have sons and daughters who know how to work,” says Carol, “And they know the legacy being left to them.”   So, now if you’re asked what 800 cows, no cell service, and a whole month without going to town have in common?  You’ll know the answer.