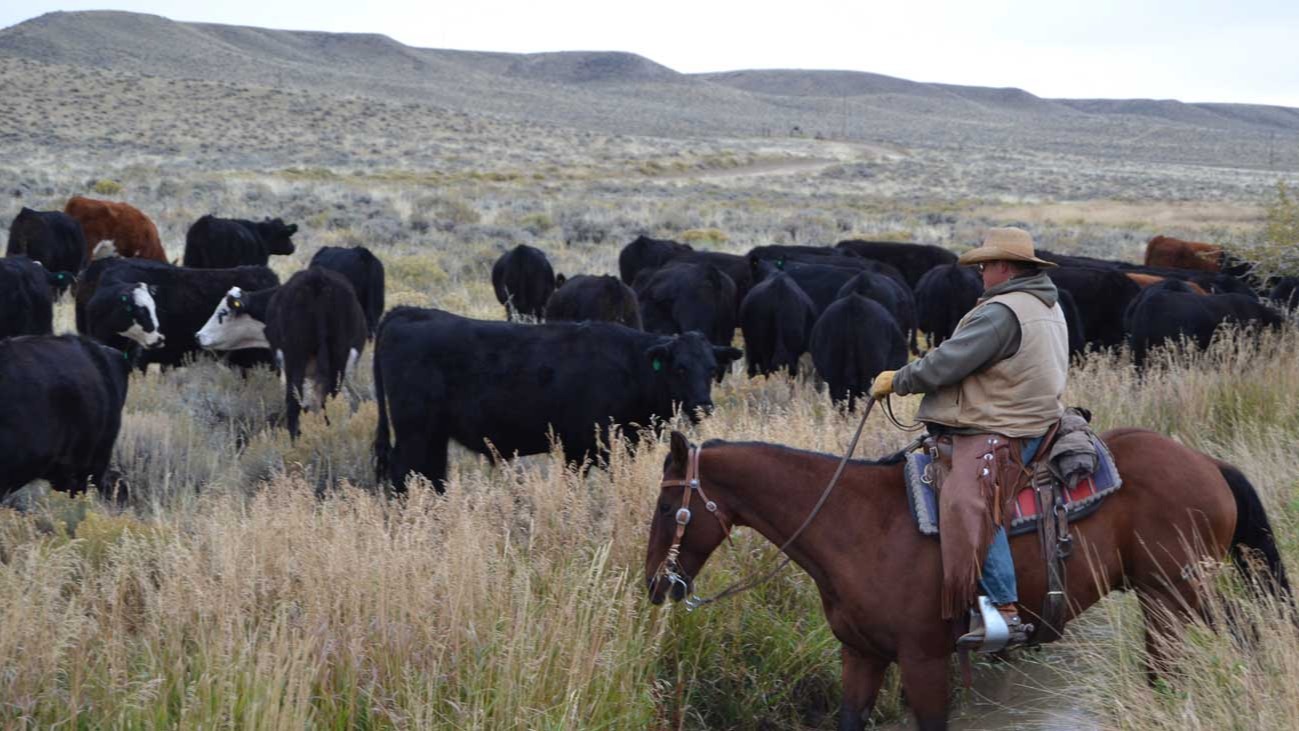 Wyoming’s Sweetwater River rises at the continental divide on the southern end of the Wind River Range. Where this 238-mile tributary of the North Platte River flows between the Granite and Green Mountains is where Rob and Carla Crofts own and operate Armada Ranches, LLC.

Carla’s family came to Wyoming in the 1930’s.  After serving in WWII, Carla’s father, Lee Whitlock, found work at the Flagg Ranch near Sweetwater Station.  He leased land, running cows on shares until he and his wife Fern were able to purchase their own land in 1960.  For five years, Lee operated both his newly acquired property, the Scarlett Ranch and the Flagg Ranch, ultimately moving to the Scarlett Ranch in 1965.

Rob was raised 40 miles north of where he and Carla now live. Rob’s great-grandparents homesteaded 20 miles upriver in 1883.  “We’ve been here a little while,” says Rob.  “Not only are we Centennial, we’re that old plus half.”   Rob’s family endured many hardships while homesteading on the Sweetwater.  In the early days, the Crofts family lived in a four wall tent with a floor.  Rob’s great grandmother was left to tend the homestead tent during the harsh winter months with three young boys while the men took the sheep out to graze on the Red Desert.  Eventually, the men built a cabin but not before they erected a shack over their mine shaft, testimony to the family’s focus and desire to build a ranch for future generations.

Although Rob and Carla grew up 40 miles apart, they were, as the crow flies, each other’s closest neighbor.  The two met at 4-H Camp.  After marrying, the couple worked on various ranches, and with the help of Carla’s parents, started their own herd of cattle.  They moved back to Sweetwater in 1994 and purchased the ranch now known as the Armada from Carla’s father in 2007.  Rob and Carla have three children, two of whom live and work on the ranch, Alicia (28),  Jessica (26) and Braxton (16).  While owning and operating Armada Ranches, Rob and Carla are also partners in Rob’s family ranch, Crofts Sheep Co.

While Rob reminisces and expresses appreciation for those who paved the way for him, he also believes progress is hugely important to livestock and people.  “We have to appreciate the sacrifices made by the people who got us to this point and honor them by embracing new technology that makes the process easier and the product better.”   Regarding sustainability, Rob says, “We are sustainable.  Ranchers invented it.  You can’t be here this long without being sustainable. “  “Sustainable doesn’t just mean managing natural resources and making a living,  it requires conscientious, informed  and science-based decisions about how you graze, manage and operate.”

The whole family agrees that care and devotion to the well-being of their animals is utmost priority and they combine that love with a commitment to wildlife and natural resource management. We don’t just raise beef” says Carla.  We raise beef responsibly and we raise a product people can trust.”

Carla is masterful in the kitchen.  While she has a core of go-to recipes that originated primarily from her mother, she’s a self-proclaimed “throw it in the pan” cook which is not surprising since the nearest supermarket is 45 miles away.  Being far from provisions requires organization, planning and plenty of supplies on hand. “Including wine,” she confides.  Along with beef, wine is a staple on Carla’s menu.  (Link to recipe for braised short ribs with red wine sauce).  On shipping day, Carla skewered several pounds of delectable beef kabobs that included beef sirloin, peppers, pineapple, shrimp, mushrooms and onions which were devoured eagerly by family, friends, neighbors and hungry cow hands.  In addition to being the ranch cook, procurement officer, chief financial officer, transportation coordinator and gardener, she is in charge of caring for and looking after the heifers as they calve.  She also assists wherever else she is needed on the ranch.

Braxton just turned 16 but has been driving for years; both cattle and vehicles.  In addition to being a remarkable cattleman, he also is active in many extracurricular activities including football and FFA. He was the 2014 Wyoming FFA Quiz Bowl Champion and is currently the vice president of his FFA Chapter.  Because the drive to town is long and frequently treacherous, Carla spends school nights in town with Braxton, returning to the ranch during the day to prepare food for the family, handle the ranch’s bookwork and do her share of other ranch work.  On the weekends, Carla and Braxton come home together.

Alicia and her husband Zack also live on the ranch and are instrumental in keeping things on track day-to-day.  Zack was raised in South Dakota and met Alicia in a nearby town after having served in the US Army.  Zack was new to ranching and has brought a lightness and humor to the family, says Carla.  “He’s been a quick study and we can always count on him to make us laugh.” While waiting for Alicia the morning of shipping, he donned her kitten hat atop his own in order to not lose track of it while saddling and loading the horses. “It’s not fall until the kitty hat comes out,” Zack said.

Alicia is the ranch’s animal husbandry specialist, caring for sick animals and completing daily chores.  This requires a keen eye, problem solving aptitude and critter-sense.  One day, Alicia unintentionally trapped a live skunk in the grainery and had to figure out how to release it without getting sprayed.  Another day, she rescued a lamb who inexplicably found its way into a 40-foot long irrigation pipe.   “Ranching is basically chaos,” says Alicia.  “A normal run for parts run can turn into chasing stray sheep in your hatchback, just like that.”  Alicia shares her life events and learnings through her Armada Ranches photo diary on Facebook.